ALL WILDERNESSES SPEAK THE SAME LANGUAGE, IF YOU KNOW HOW TO LISTEN

“Everybody knows...that the autumn landscape of the north woods is the land, plus a red maple, plus a ruffed grouse...the grouse only represents a millionth of either the mass or the energy of an acre. Yet subtract the grouse and the whole thing is dead.”

A few days before my 43rd birthday I found myself sitting at dusk on the crest of a small hill on the Brady Ranch in Winnett, Montana. I watched and listened closely as the light dimmed over the grasses, cattle bellowing in the distance, as the twilight cast its sheet over the dregs of the day. The last “pit-zop-o-zee" of the grasshopper sparrows trailed off, while the vesper sparrow continued to sing for just a little while longer. On a gnarled tree pushed up against a distant fence line, a persistent meadowlark refused to relinquish even a moment of daylight to any would be usurpers looking for a territory of their own.

A cool mist had begun to rise from the soil, prompting the clumsy crash-prone chafer beetles to launch themselves with varying degrees of success into the heavens.  A short-eared owl strafed only a few feet above my head and blasted me out of my skin with a single gruff bark. I couldn’t help but smile at the cheeky bird and attempted a call back, but its silhouette had already disintegrated silently into the horizon. 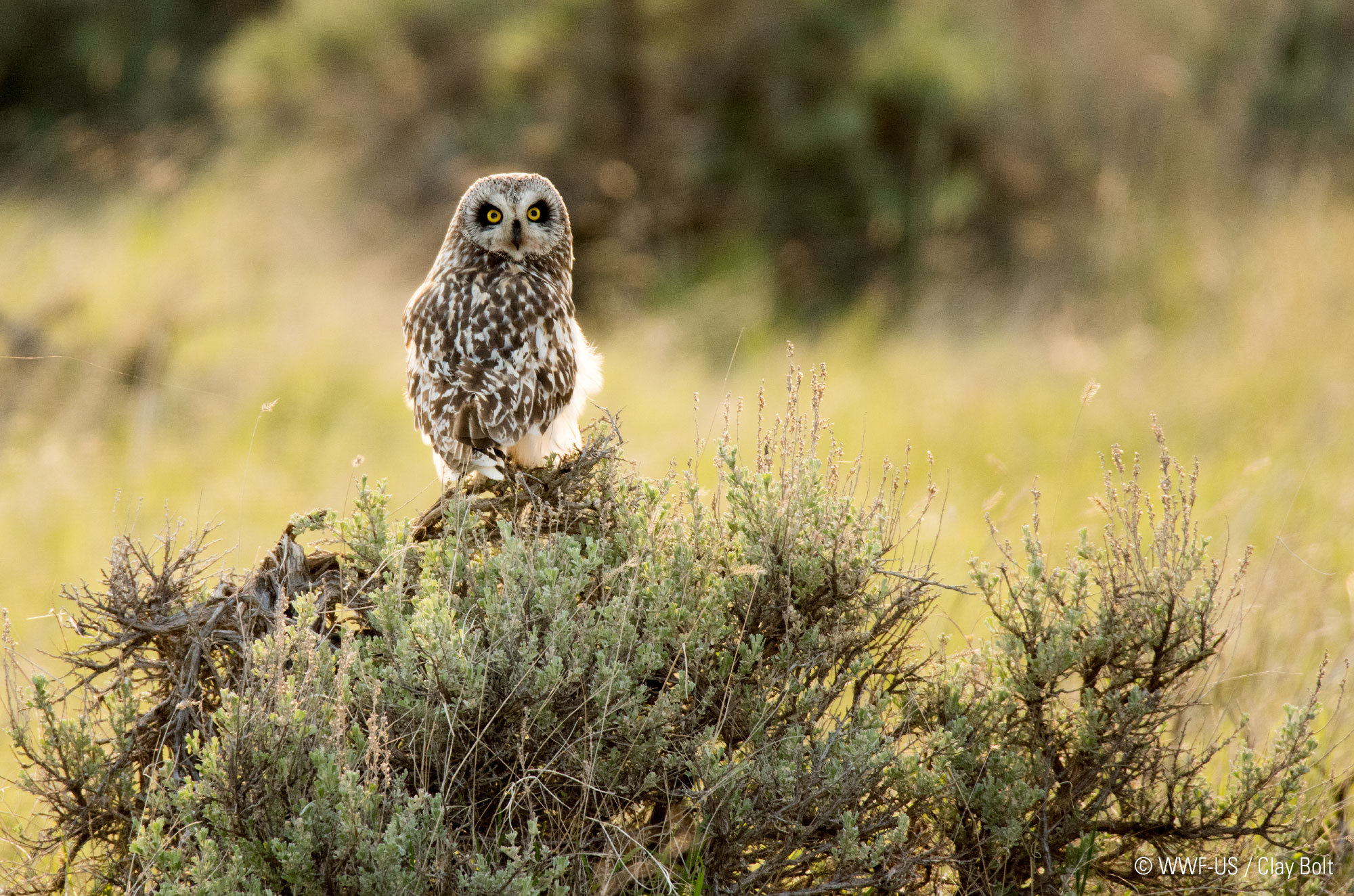 A short eared owl perches on sage on the Brady Ranch.

The prairie is a landscape that likes to be courted and I’ve come to love it dearly.  Perhaps that’s why so many have developed such a love affair with the west and the Great Plains. It is a landscape that nearly always wants to elude your grasp. You never have it squarely in your palm, no matter how hard you try. Insights must be earned, which makes the process that much more rewarding. On the other hand, it also makes this landscape much more difficult to “sell” to others.

A grassland, like our own bodies, is a collection of organisms working collectively as a single unit. It’s easy to judge a book (or a body as it were) by its cover(ing), but to do so would be missing out on its substance. As philosopher Jon Rawls puts it, “Each animal is an ecosystem with legs.” Extending the metaphor, a grassland is an ecosystem with legs, roots, wings, and scales. That is, to truly understand a grassland, you need to see beyond its outer walls and peer deep within to understand what makes it tick.

If you pay attention you’ll find sparrows creeping through the grasses like mice, boldly striped tiger salamanders following ancient migration routes, box turtles submerged in water-filled bison wallows, and candy-striped bees sleeping like ornaments on the grasses at night. All in all, the grasslands of the Northern Great Plains are home to 95 species of mammal, 300 species of bird, 1,595 species of plant, 121 species of fish, 41 reptiles and amphibians, and thousands of invertebrate species, many of which have yet to be discovered. 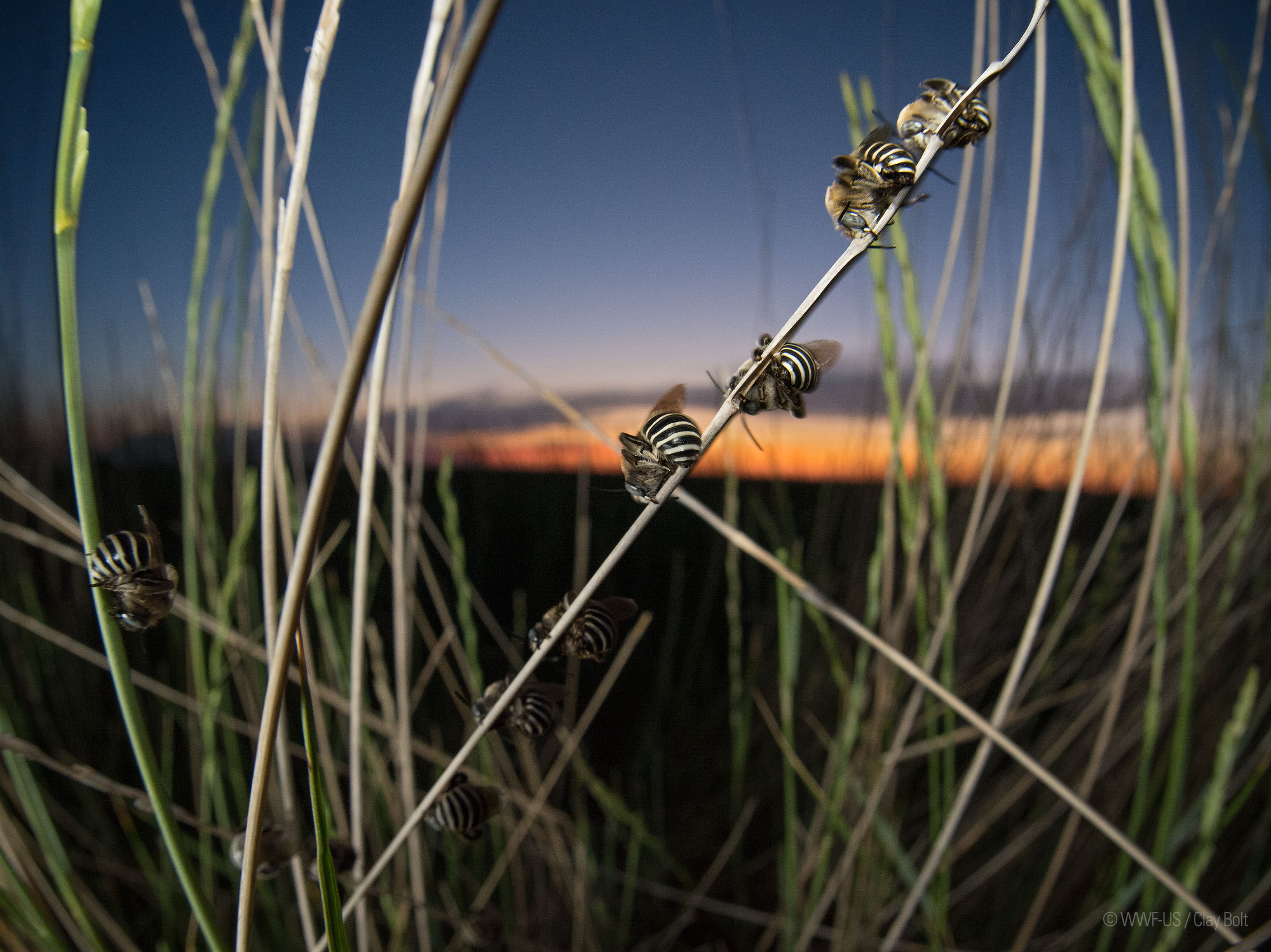 We reference many spectacular places on our planet in the simplest of descriptions: desert, ocean, and mountains come to mind. However the land, with its unfathomable depths and differences, can hardly be corralled by only a couple of syllables. What we gain in terms of the speed in which a concept can be expressed risks becoming a missed opportunity to delve into the richness that it is made of. Let’s take a stroll through the idea of “forest,” for example. It’s a landscape that many of us are familiar with.

When you hear the word “forest” a type of forest comes to mind. This could be a woodland that we grew up playing in, or a stand of mighty redwoods that we once explored on vacation. Perhaps the closest thing we’ve come to a forest is an overgrown city lot containing a few trees that we pass on our way to work each day, or an image that is conjured from a favorite childhood story.

A forest, by actual definition, might well be an ecosystem of a particular-scale, with certain assigned characteristics and functions, but in the landscape of the mind, those rules don’t matter much. Even when a person’s understanding of an ecosystem is extremely limited, we make judgements of its values based on what we know. 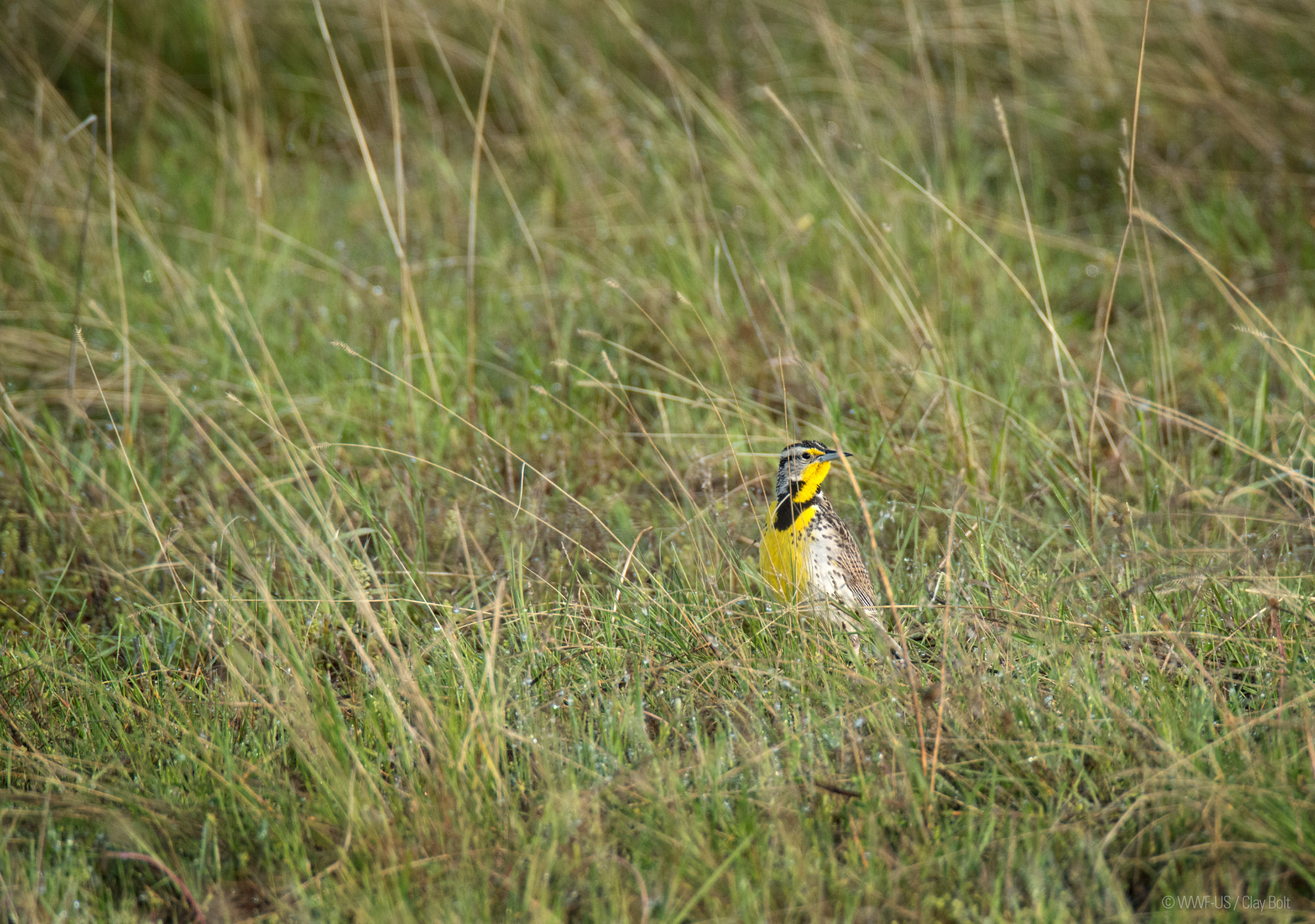 A Western Meadowlark, patrolling his nest site on the Brady Ranch.

When we spend time in a wild place, our perceptions are nurtured; maturing into a deeper understanding that is offered freely in exchange for the time that we've given. Our understanding begins to go beyond the obvious, shifting from reaction to reaction that grow from, “I can see a brown bird in the grass,” to “that’s a sparrow," to “it's a clay colored sparrow," to obtaining the skill to identify it only by its call, or the figure its wingbeats trace in the air. The level of knowing will always continue to guide the dedicated observer into the infinitesimal, giving back as much—if not more—than was put in.

In cultures where people spend a lot of time in contact with nature, their vocabulary often expands well-beyond the boundary of simply naming tangible things. Words unfurl like fern fronds to describe the in-between moments born only from deep observation. In his book Landmarks, Robert McFarlane includes glossaries of forgotten words describing various natural phenomena that were once used by inhabitants of the British Isles. The words are at once both sweet and cumbersome on the tongue, describing ephemeral, less obvious things such as the gentle sound made by a quick-flowing stream, deer tracks through a thicket, or a sudden temporary glimpse of the sun between passing clouds.

This is the language of a true watcher. I find it sad that while my own ancestors were once equally tied to the land, my modern diction rarely stretches to accomodate such a subtle understand of nature.

When someone hasn’t had an opportunity to walk through the grasslands, their understanding is built upon impressions made via television and books, as well as the closest actual grasses they’ve experienced, which is in many cases the suburban lawn—a poor substitute at best. It’s akin to processed honey or concentrated fruit juice: we’ll never know how lacking these foods are until we’ve experienced the real thing. Once the taste has danced upon our tongue, we can never go back.

Actual, healthy grasslands have roots that go deep within the earth. When they are plowed up, they take decades, if not centuries to recover. No cheaply fashioned substitute—an agricultural field or soil patched over with a fast-growing, non-native substitute—will ever do for people, and especially the wildlife that depend on this ecosystem.

If a person has never had the opportunity to savor the sweetness of these special places, how can we ever expect them to develop a taste for caring about their future?  How will they ever intertwine their own deep roots of compassion and concern among those that anchor the Great Plains? This is a question that keeps me up at night.

Since 2010, on average over a million acres of grasslands have been plowed-up across the Northern Great Plains for row crop agriculture. This is a rate that’s comparable to deforestation in the Brazilian Amazon and yet, it rarely makes headlines. Where is the public outcry? “Save the grasslands” bumper stickers are rarer than a Dakota skipper. 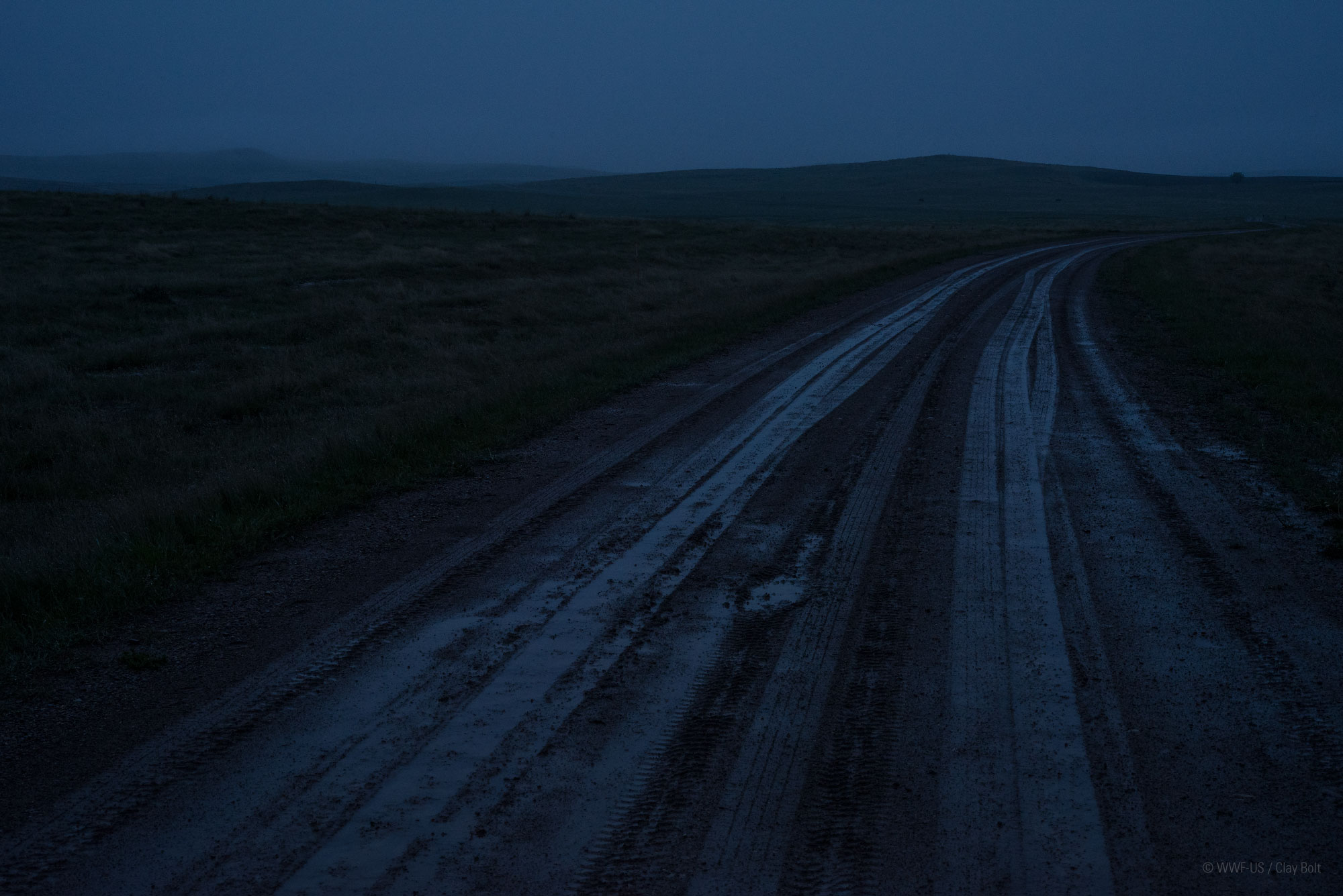 It was nearly dark, and although the mosquitoes born during the recent rains were having their way with my arms, I lingered just a little longer to witness the last light fully fade across the Brady Ranch. I could barely make out the dirt road back to the cabin, or the scattered herd bedding down in the soft grasses for the evening, but that was alright with me. A rich silence enveloped me. It actually soundless, but a natural lull a subtle audible tapestry woven together by the gentle chirps of crickets—enveloped me. A person would have to be pretty darn unreceptive not to feel something for the grasslands after a few moments like this.

It occurred to me the prairie isn’t so different than the Amazon or some other beloved environment. All wildernesses speak the same language, just with different speeds of delivery and dialects. Animals are slow to reveal their daily lives, plants work on their own time-tables over a season, and the rains fall when the clouds are ripe with moisture.

Robin Wall Kimmerer writes “to be native to a place we must learn to speak its language.” For those of us who are fortunate to learn the language of the grasslands, it is up to us to teach others who may not have the opportunity to do so firsthand. If we want others to care about protecting this extraordinary natural system, the wildlife, and the people who care for it each day, we must be willing to become translators for those who don’t yet speak the language of the grasslands.

Perhaps one day, they’ll also hear the wind blowing through the grasses and understand that it is whispering over and over, “Listen. I am here. I am vital. You need me more than you know.”